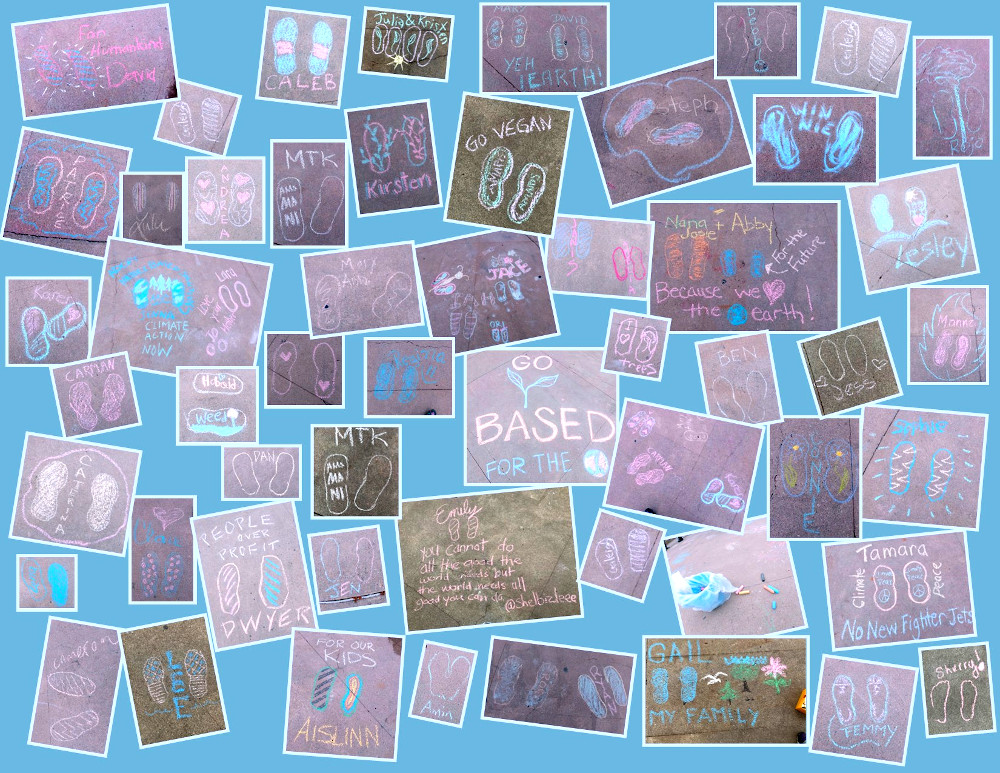 On Friday, September 24th, about 60 people from Waterloo Region dropped by Waterloo Public Square, and helped us demand climate action … with chalk. Visitors outlined their footprints with chalk, added their names, and made a two-part climate action promise. The first part was political: to hold the government accountable to meet and exceed its climate plan. The second part was personal: to be open to changes in eating and energy consumption to walk more lightly on the Earth.

About political accountability, Canada’s federal climate plan — even if it is flawlessly executed — is insufficient, putting us on an alarming trajectory to overshoot the 1.5°C Paris Agreement maximum global warming target, as rated by Climate Action Tracker. When considering Canada’s privilege as a developed nation with high per-capita emissions and income, to take responsibility for our fair share of a global climate solution, our plan does not go far enough. We need action to strengthen our plan and implement it. As concerned citizens, let’s continue to demand accountability from governments at all levels to save the world.

At a personal level, in addition to reducing fossil fuel use and non-renewable consumables, we have much collective potential to mitigate climate change by not supporting industrialized animal agriculture.  The Oxford food study found that animal agriculture uses 79% of the agricultural land, while only providing 18% of calories.  Switching to a plant-based diet could free up 75% of agricultural land, which when left to rewild, would draw carbon dioxide from the atmosphere.  Switching to plant-based diets reduces methane and other greenhouse gas emissions, water and air pollution, and fresh water use.

Thank you to everyone who came out! Let’s continue to spread the messages and take actions.